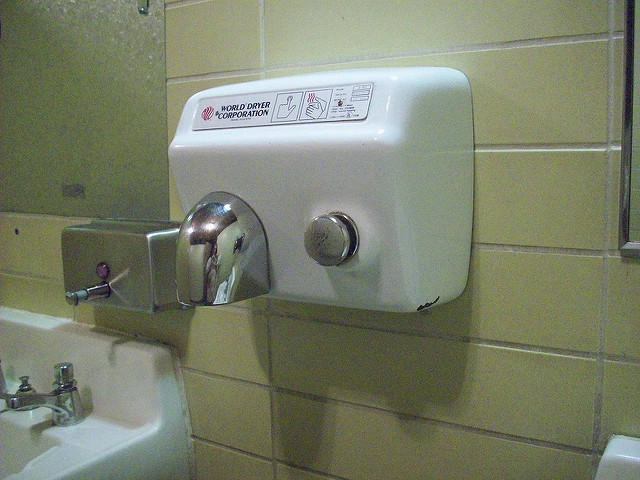 Washing your grubby mitts is one of the all-time best ways to cut your chances of getting sick and spreading harmful germs to others. But using the hot-air dryers common in bathrooms can undo that handy hygienic work.

Hot-air dryers suck in bacteria and hardy bacterial spores loitering in the bathroom—perhaps launched into the air by whooshing toilet flushes—and fire them directly at your freshly cleaned hands, according to a study published in the April issue of Applied and Environmental Microbiology. The authors of the study, led by researchers at the University of Connecticut, found that adding HEPA filters to the dryers can reduce germ-spewing four-fold. However, the data hints that places like infectious disease research facilities and healthcare settings may just want to ditch the dryers and turn to trusty towels.

Indeed, in the wake of the blustery study—which took place in research facility bathrooms around UConn—”paper towel dispensers have recently been added to all 36 bathrooms in basic science research areas in the UConn School of Medicine surveyed in the current study,” the authors note……..

…..In a final test, the researchers did a cursory look at some of the other bacteria the dryers were blowing around. They found that with or without a HEPA filter, the blowers stirred up potential pathogens, including Staphylococcus aureus.

The findings should be a wake-up call to managers of research and clinical settings. The authors note that Clostridium difficile—a devastating and intractable diarrheal plague—also forms spores, and researchers have found that a flushing toilet can easily launch it into the air.